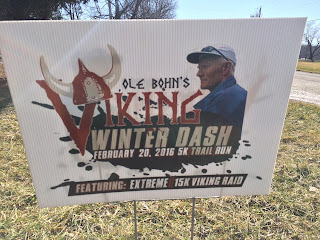 I regularly get emails from American Multi-Sport and when I saw what the medal was going to be for this event, I was tempted. But Muncie, IN isn't THAT close to where I live so I didn't initially sign up. Then my friend Allison sent out a group email a couple of days before one of the price increases - and she said she would drive - so I caved into the peer pressure and registered. With taxes and fees my total cost was $65.99. This was in early November and the race date was February 19th so like usuall...I forgot about it until it got closer.

All along I figured I would try to dress the part and had planned on getting a costume online. 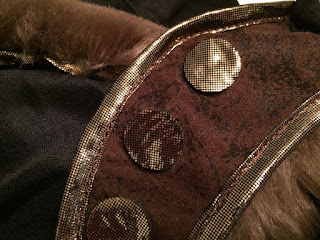 I posted this "sneak peak" photo on Facebook of the costume but didn't indicate what it was. It is fun to keep people guessing!

Allison met me at the Cracker Barrel just off the interstate since she was coming from the West and we needed to head northeast for the event. The "Barrel" is only about 15(?) minutes or less from my house. I ended up driving to the event and after one interstate snafu - there was an accident so we had to reroute ourselves - we got to the race location in plenty of time.
﻿

The Warrior Vikings were starting to line up! 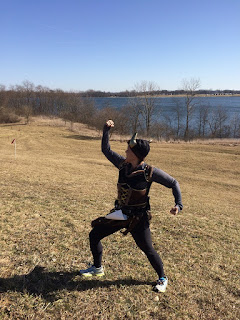 Trying to strike a fierce Viking Warrior pose!
The weather for this event was unseasonably warm for mid-February. I had initially worn a black short sleeved tech shirt under my Viking costume but decided to swap that out and put on the long sleeved race tech shirt they gave us instead. I would have been fine staying with short sleeves. I ditched my throw-away after about a mile and there were times - since there was FULL SUN beating down on us - that I got too warm. Allison should not be trusted as a weather barometer since she is very cold natured!

To follow are just a bunch of pictures from the course.  This was only my second true trail event and I'm not a fan of mud. Sorry, I'm just not.  I was trying to avoid it like it was nobody's business. Some guy yelled to me "Embrace the mud, girl!" to which I hollered back, "No way, man!" There wasn't mud everywhere but there was enough for me! 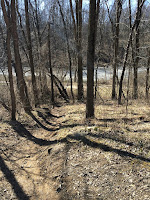 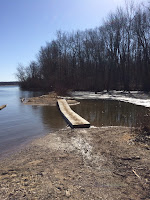 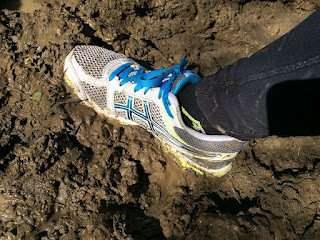 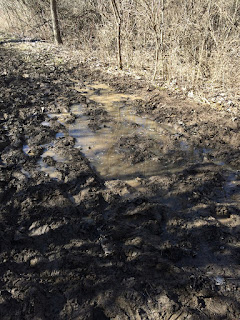 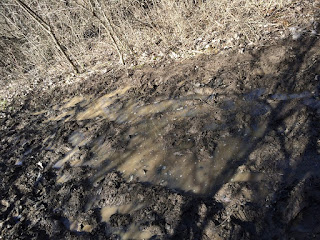 This is also a horse path. Luckily this sign below wasn't for me since you could go left or right! 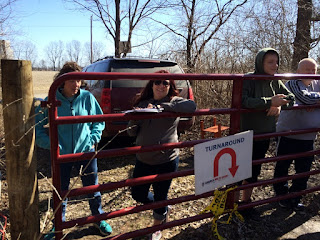 As the sign indicates this was the turnaround and our bib number was checked at this point. But everyone standing behind this gate made me think that they were on display.
"Please don't feed the people" 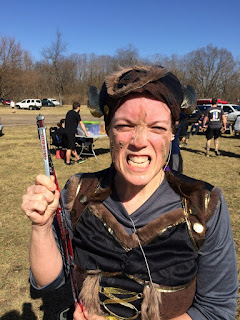 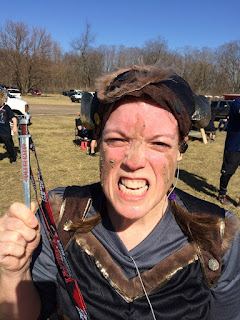 Below is the official race finishers picture.  I let out a great big roar as I was crossing the finish line. Too bad I have my cell phone in my hand! 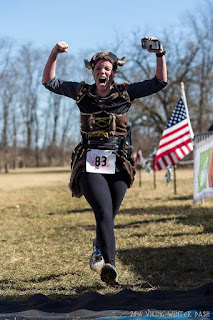 So this is the medal. It really was the draw for me to do this event but I must admit that in person...it is the size of a letter opener. While it is unique and different I was disappointed.﻿ 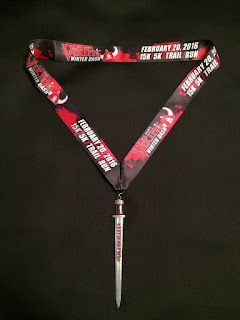 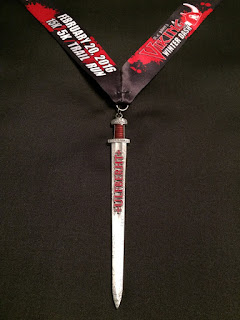 Final thoughts on this event: although this was only my 2nd trail run, I just don't think I'm a fan. I can't imagine had I signed up to do it last year when they had all of the snow. I mean, I probably would have been a DNS. I'm glad I did it for the experience but I won't sign up to do it next year. The medal next year is some sort of Warrior hammer but seeing how the sword turned out...it is not a drawing point for me. Overall, the race company runs a pretty good race. I wished there had been one more aid station out there since it was so sunny. I did not have my own water with me.  It was a pretty course and would probably be gorgeous in the Fall.


Posted by Skelton Adventures 2 at 6:35 PM No comments:

Seriously...this was so long ago. What do I even remember about it?
I suck at blogging but here we go!

The LoveStruck 5K is put on by a friend of mine. He and his wife own RaceMaker Productions (RMP). I try to do their races when I can.

After the 5K on Saturday (Run For Love 5K), I scurried downtown to packet pickup only to find that there was no packet pickup! RMP revamped their website and it was still incorrectly listed but had been changed to race morning only.  Not that big of a deal except I wouldn't have my shirt in advance - which I like to have. As a token of saying they were sorry, I got an email back letting me know I'd get a free entry to any of the other races that they own. SCORE!!!

This race took place on the southside of downtown Indy. The start and finish was at a bar called Tow Yard Brewing Company. 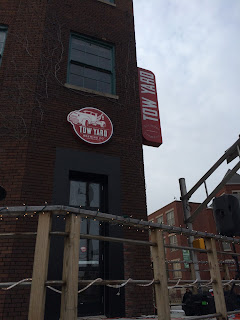 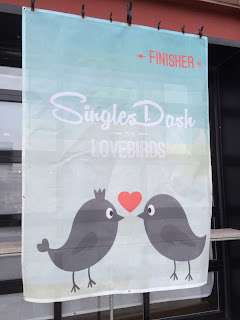 Although technically it was "warmer" this morning compared to Saturday morning's 5K temps, it definitely felt colder.  There was no sun and there was wind. 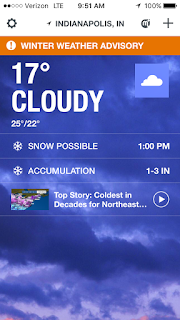 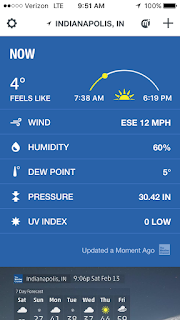 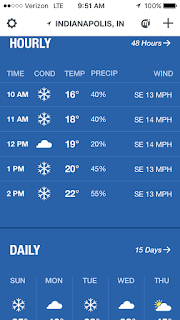 There was plenty of parking and we picked up our bibs and shirts INSIDE Tow Yard Brewing Company so we were able to stay warm until the start of the race and use REAL restrooms.

From what I remember, the race started mostly on time. Several people were dressed in Valentine's apparel. I had on a festive red hat but my race shirt was covered up by my jacket.

The course was basically a 1.55 mile out and back. There were parts of the course that I'd run on before; once during the 2015 Santa Hustle and most recently during the Miler Training series back in February. Maybe because it is still winter and everything is grey and gloomy, there wasn't much to look at and it was pretty unspectacular.

And while this is virtually impossible to actually happen...it felt like we were running into the wind the entire time. It also started snowing at one point. Although I was confident that I would have a faster finishing than yesterday's 5K  (since I walked all of that one with friends), I was hoping that I would do better than I actually did. :(

Once again several walking breaks - seriously, during a 5k? - because I haven't trained a bit since I don't know when.

As I was crossing the finish line, Lee called out my name. As he did, I pointed over to him which is the picture below.  After he realized who I was he also commented that he needed to get with me about that free race entry. 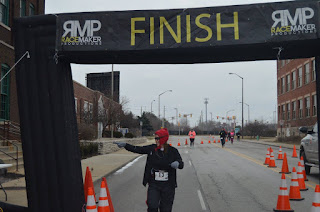 There wasn't much time to dilly dally around afterward, I went into the bar which is where we then got our medal, grabbed a water, a banana and some cookies.

Found someone to take a Finishers picture of me and then I need to hurry home and shower because I was headed to my Mom's house (an hour plus west of where I live) to help my brothers with a project over there. 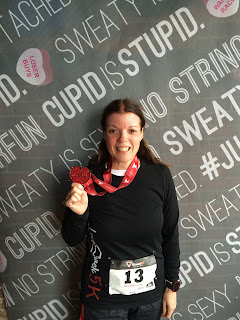 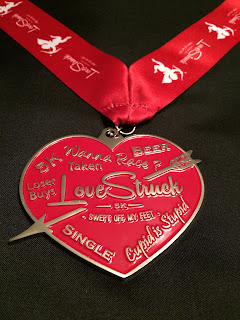 Posted by Skelton Adventures 2 at 7:37 PM No comments:

Skelton Adventures 2
This blog is mostly a “memory book” for me. I am not a literary phenom. So my apologies if you find an occasional misspelled word, grammatical error or the longest run on sentence in the history of the world. I'm married to a great guy. He's a much better runner than I am but is willing to wait for me until I cross the finish line too. He's even humoring me by agreeing to follow along with my 50 half marathons in 50 states goal. We don't have any children but three wonderful & silly dogs. We enjoy traveling and have taken some great trips…almost all of them John planned. Check out my first attempt at blogging here: http://skeltonadventures.blogspot.com/