Here we are again, another year. Time for a fresh start, new beginnings. A time for hope and promise of better things. How often does that really work out? I looked back at what I had hoped to accomplish in 2018 - there were only 5 things - and I can't even say that I came close to any of them.

This blog is "Skelton Adventures" and 2018 found adventures of different kinds.


My husband and I did go on a couple of trips but I mostly didn't travel too often or too far because of my Mom.

For the first time ever, I did more 5Ks than I did half marathons. Some of that was from not really running / training at all and so it was easier to just schlep though a 5K. I did have fun at those 5Ks. But I also struggled with the finding the enjoyment of doing the same ol' Indiana half marathons so I didn't sign up for some of the usual races.

I usually start the first blog of the new year with my mileage recap so here is that Year-To-Date mileage tally that I always do: 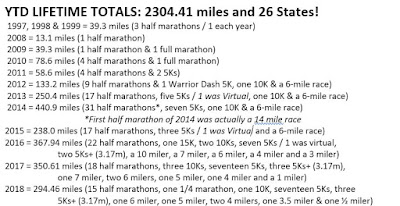 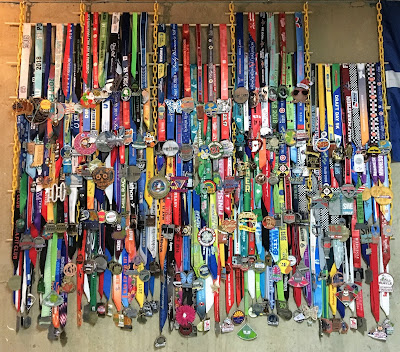 I don't think I'm going to post any goals out here. I only have a few that I've written down.

But I am going to try to blog at least once a week and since there isn't too much going on right now - certainly no races - I'll try to briefly recap some of the 2018 highlights.

There's no reason to just give up. So here I go...starting over AGAIN.


Posted by Skelton Adventures 2 at 4:24 AM No comments:

Skelton Adventures 2
This blog is mostly a “memory book” for me. I am not a literary phenom. So my apologies if you find an occasional misspelled word, grammatical error or the longest run on sentence in the history of the world. I'm married to a great guy. He's a much better runner than I am but is willing to wait for me until I cross the finish line too. He's even humoring me by agreeing to follow along with my 50 half marathons in 50 states goal. We don't have any children but three wonderful & silly dogs. We enjoy traveling and have taken some great trips…almost all of them John planned. Check out my first attempt at blogging here: http://skeltonadventures.blogspot.com/